The Witch of the Waste is the main antagonist of Howl's Moving Castle.

She is a talented witch who was so beautiful that Howl pursued her, but after finding out that she used magic to keep herself looking young and beautiful, he left her. She is still in love with Howl however, and uses her magical powers and henchmen to try and capture him after seeing him with Sophie. That is why she arrives at night to Sophie's hat shop, and insults her before turning her into a 90 year-old woman. As Sophie leaves her hometown in order to break the curse on her, she reaches Howl's castle. Through Sophie's pocket, the Witch uses ancient sorcery to put a powerful spell on Howl in the form of note. The scorch marks read: 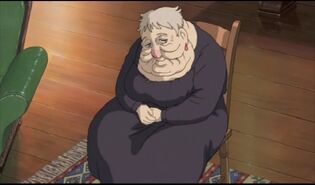 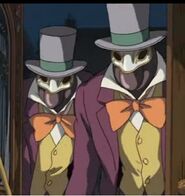 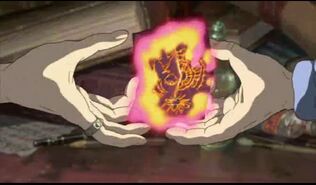 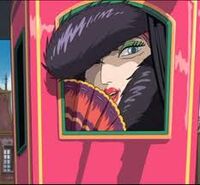 Add a photo to this gallery
Retrieved from "https://howlscastle.fandom.com/wiki/Witch_of_the_Waste?oldid=4202"
Community content is available under CC-BY-SA unless otherwise noted.
FandomShop Fandom IG GalaxyQuest